On Saturday 6th February, 18 Cub Scouts from Oatlands Scout Group attended their first Sustrans Ranger event along the River Thames. The Cub pack, which has its headquarters in Oatlands Village near Weybridge, have teamed up with the charity Sustrans. Their aim is to keep the part of National Cycle Route 4 that runs along the Thames FootPath between Walton Bridge and Weybridge in good condition. Their responsibilities include litter collection, foliage cutting, path repairs & general good order.

Oatlands is the first Scout troop to link-up with Sustrans in the UK – they are a pilot Cub Pack which all the Cubs think is great!

One of the Oatland Cub Assistant Leaders, Simon Davey, is a strong supporter of the Sustrans charity which is responsible for a national network of 12,000 miles of mainly traffic free cycle routes across the UK.

Simon met with George James, who is the local Sustrans Liaison Ranger and Julie Tublin from Sustrans in November 2009 to agree what role the Cub pack could perform. Saturday 6 February was the first meeting of the Oatlands Cubs with supporting parents. The group filled 18 rubbish sacks from between Walton Bridge and Weybridge in just over two hours. Luckily it was a fine, dry day and all the Cubs had a great time.

All of the Cubs were prepared with leather gloves, good foot wear & parents attending to minimise the risks and maximise their efforts! This work will contribute towards the Cubs Community Challenge Badge, their Promise Challenge Badge and their Global Conservation Badge but above all, its a great opportunity for these young people to give something back to their neighbourhood.

Following are some photgraphs of the cubs hard at work: 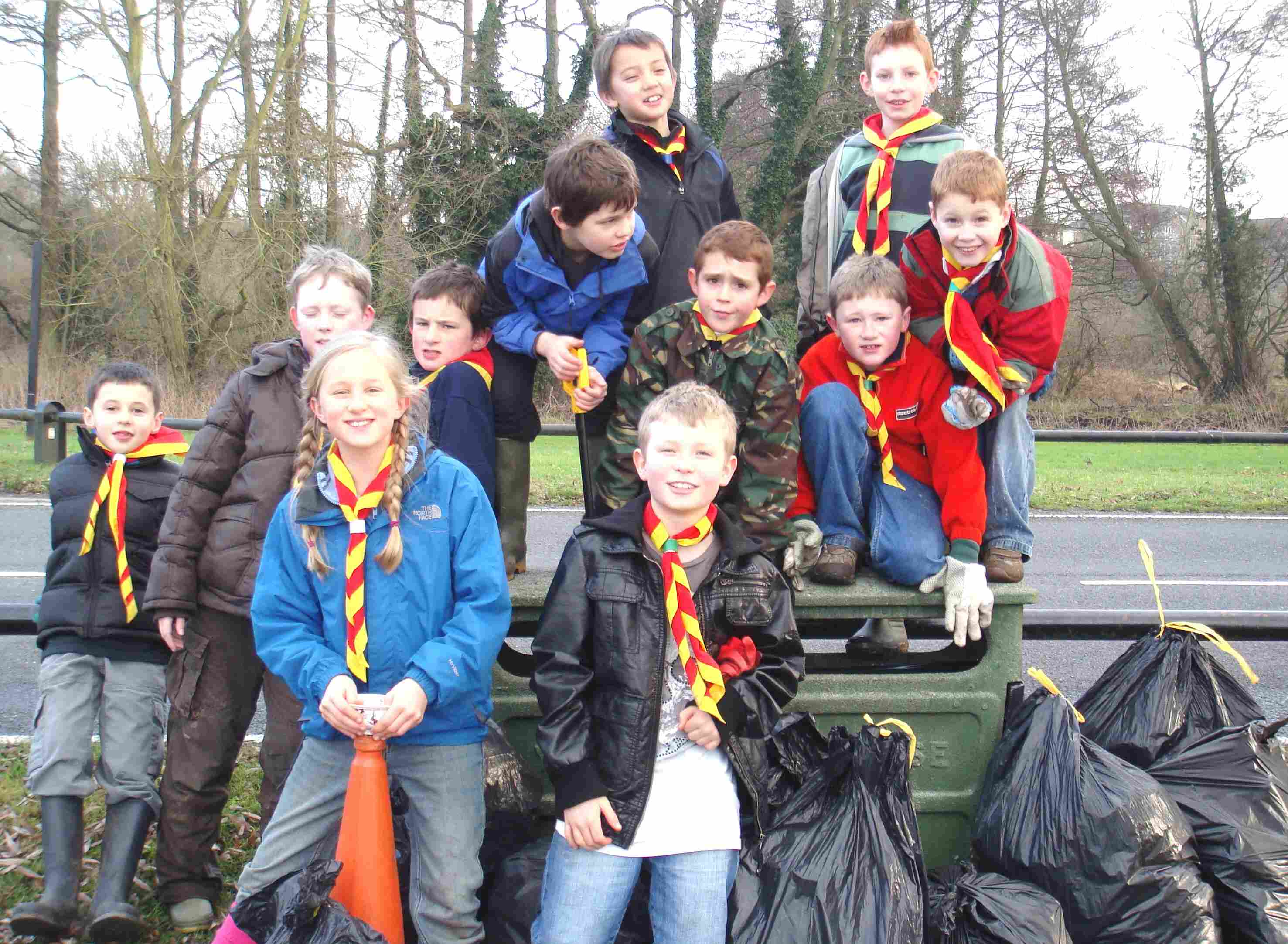 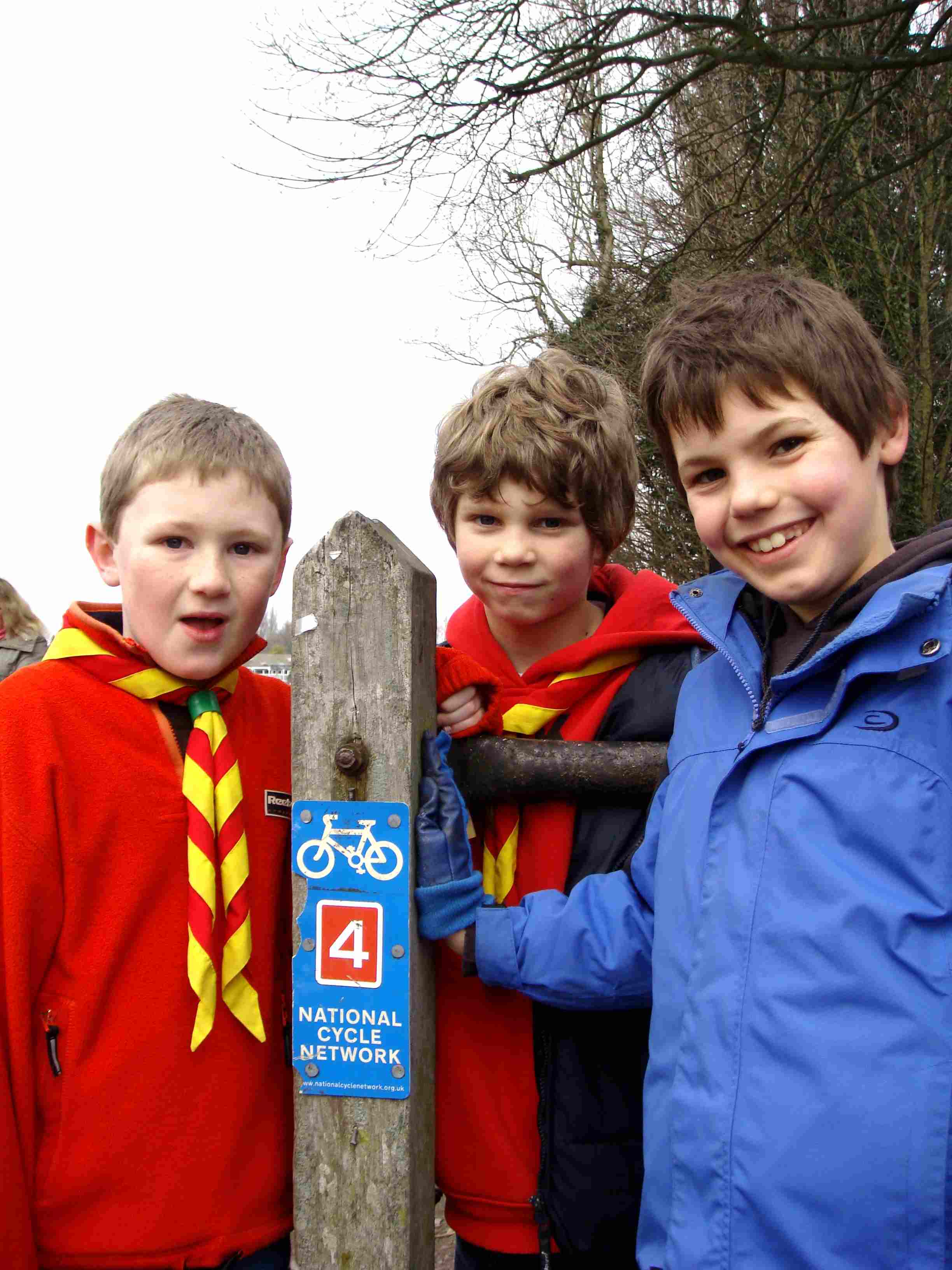 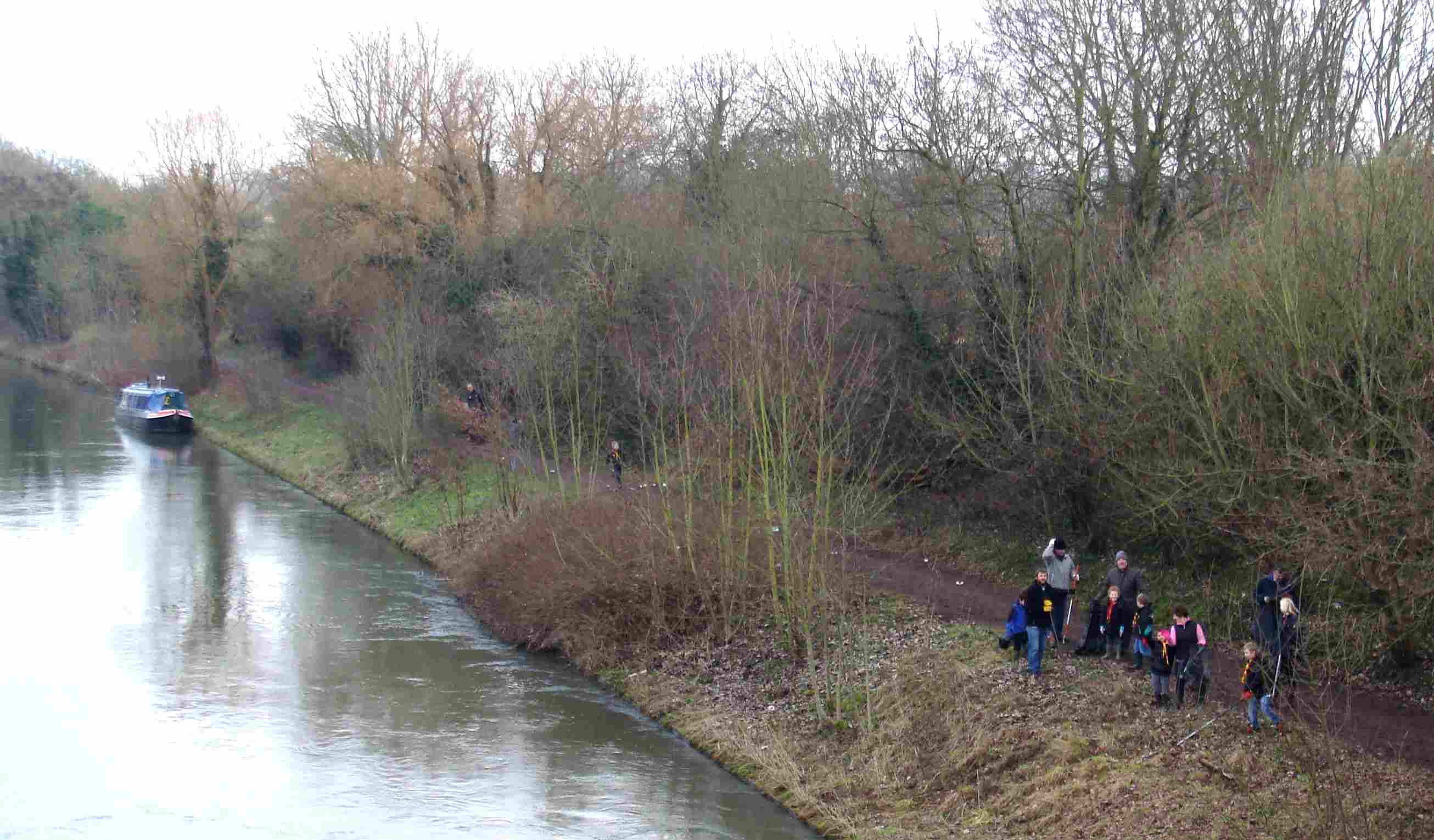 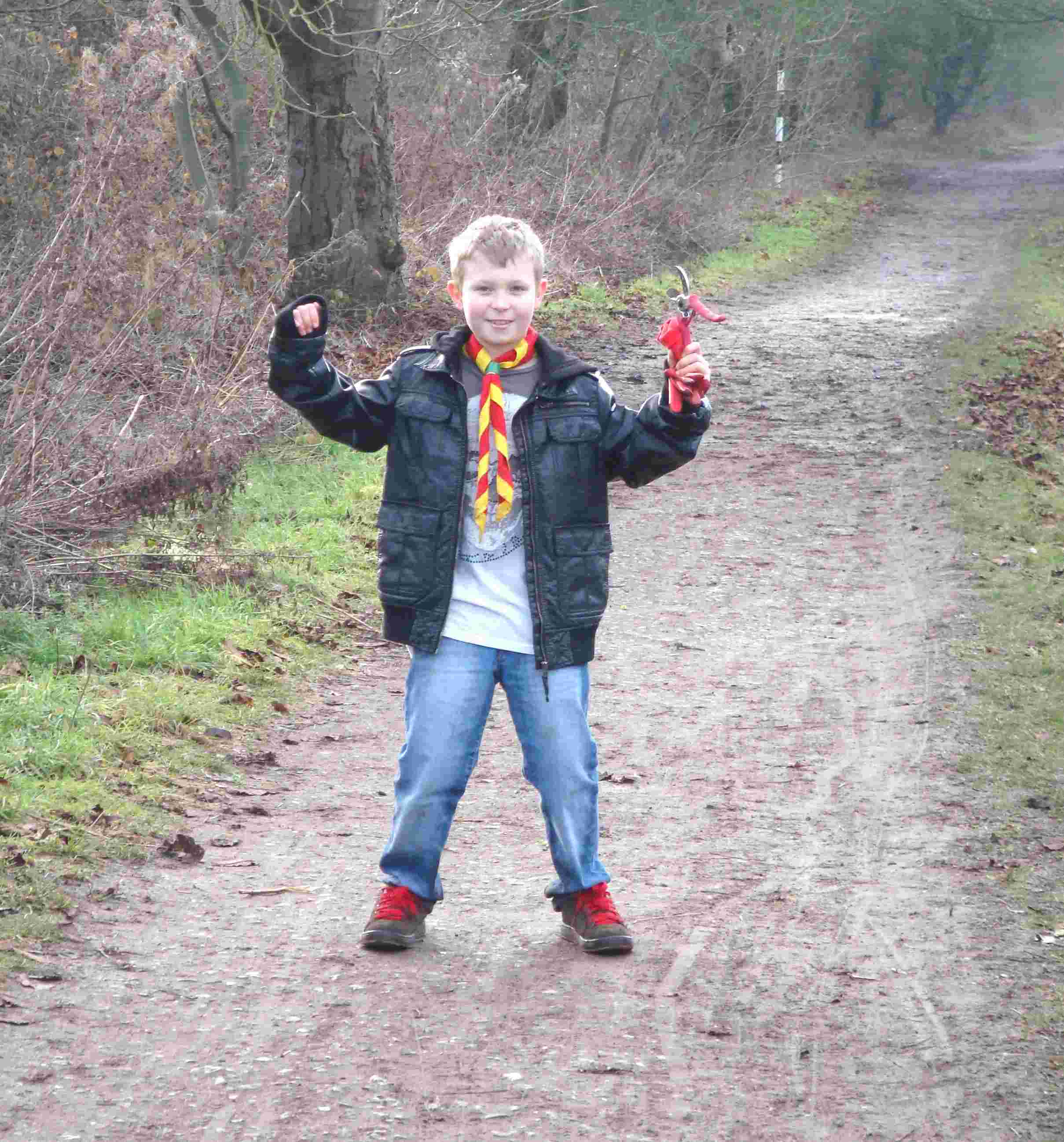 In a 12-month period, Elmbridge has seen an increase of over 60% in reported bicycle theft, rising from 279 incidents to 455 (this excludes thefts at railway stations).

In support of reducing future cycle crime a ‘Cycle Secure’ event is being held at the Heart Shopping Centre in Walton on Saturday 13 February, between 9am to 1pm. Please bring your bike and reduce crime.

Surrey Police are running the event, with funding from the Community Safety Partnership and sponsorship from East St Cycles in Walton, who are offering 25% off any SOLD SECURE GOLD certified bike lock. Police officers will be offering free property marking and providing advice about securing bicycles, as well as shed and garage security.

Despite the profusion of unconditional Road Closed signs, Seven Hills Road is unequivocally open to cyclists this week.

What’s more it’s a really nice ride. Compared to what it’s like when fully jammed with traffic it’s a very pleasant route and well worth taking advantage of.

We’ll start from outside the Hand and Spear at Weybridge Station as usual. The plan this month is to stick to the roads and head South. Exact route to be revealed on the day.

The usual format, ride for an hour or so, stop for lunch at a pub and then another hour or so returning to Weybridge Station. 10-15 miles, 3 -4 hours.

If you want to come along just turn up on Sunday at 11:00 outside the Hand and Spear. As daylight is very short at this time of year please consider bringing hi-visibility gear and/or lights.

Seven Hills Road: Thank you to all of you who emailed Ian Lake about this, he’s passed our comments and views on to his negotiator but we’ve not heard anything back yet. If you haven’t written to Ian, please do so, it’s not too late and the weight of opinion really does make a difference. His email address is: i.lake@surreycc.gov.uk

Now, since I always seem to leave it to the last minute to send out details of these rides I thought it might be helpful to have a schedule. These dates are provisional and may change but we’ll try to keep to them if we can:

After that we may revert to the summer schedule of Thursday evenings.

Next, The Weybridge Society is preparing a Transport Strategy document in response to the Council’s Core Strategy (you may remember it being presented at a town meeting in St James Church a few months back). The Weybridge Society is a resident’s association that represents all residents in Weybridge. They are looking for input in formulating a strategic vision of transport in the area. Obviously cycling is a key consideration and so ideas and suggestions from cyclists would be very welcome. If you have any input please email me and I’ll make sure it gets taken into account.

Ian
I am writing to you, on behalf of the Elmbridge Cycle Group, to express our concerns about the lack of provision for cyclists during the closure periods of Seven Hills Road.

I appreciate that you are already aware of this and welcomed the statement you made yesterday at the Local Committee meeting indicating that you were still in discussion with Robert Haddlestone about possible solutions.

I’d like to take this opportunity to ensure that you are fully aware of the considerations that are important for cyclists during the closures.

1 There are very few north/south cycle routes in this area. The main choice for any cyclist crossing the borough in this direction is either Seven Hills Road or Brooklands Road. Neither are good routes but they are strategically important for cyclists that need to travel north/south, from Walton or Weybridge to Cobham for example.

2 The official car diversion route for 10 miles along the A3 is obviously unsafe and impractical for cyclists. The shorter alternative along Byfleet Road and Brooklands Road is busy and very unpleasant for cyclists.

3 While the movement of the main closure period to the summer months is welcome, it is the peak season for cycling and so the effects of no access along Seven Hills Road will be amplified. More cyclists would be inconvenienced than during the winter months.

4 I believe you are already aware that one of the difficulties with the orginal plan was that cyclists would not be permitted to make a right turn from Byfleet Road into Seven Hills Road when approaching from the Cobham direction. This was overlooked in the original proposals and I presume that this is one of the points that you are currently in discussion about.

5 I was unable to ascertain from the plans presented at the SCN open day whether there would be any provision for cyclists along the section between Burwood Road and Queens Road, which I believe will be used for equipment and materials storage during the project. The presumed diversion route if cyclists were not permitted to use this section would be Burwood Road, Westcar Lane and Queens Road. This is five times longer than the direct route, two thirds of which would be along fast and busy sections of the A317. Cyclists would inevitably take short cuts through either the St George’s Hill or the Burwood Park estates which would not be welcomed by those residents.

Finally, I understand that SGN will be resurfacing the Queens Road roundabout on completion of the works and presumably resurfacing the road at other places. This would seem like a good opportunity to look at ways that the junctions can be re-marked to better accommodate cyclists. In particular consideration could be given to advance stop lines at all the junctions onto Queens Road roundabout, the Burwood Road roundabout and especially the traffic lights at the southern end of Seven Hills Road. The other measure that could be achieved at this time would be the implementation of the much called for shared cycle path along the length of this road. I know you are already aware of this need and the issues around it, but I’m sure you’ll agree that there will be no better opportunity than this.

Please do contact me if you require any clarification about these points or would like to discuss anything.

From Christmas we’ll have a brand new cycle route in Elmbridge.

That’s the good news. The bad news is that we’ll only have it for six months.

And the other bad news is that there will likely be traffic chaos in the Weybridge area as the whole of Seven Hills Road will be closed for that period. You can read all about it here on the Weybridge Society’s web-site.

The good news for cyclists is that we will have traffic free use of Seven Hills Road for the duration of the works. Let’s make the most of it.

We’ll start from outside the Hand and Spear at Weybridge Station as usual. The plan this month is to proceed South towards Wisley and then on to Cobham and back through Esher. It’ll be about 15 miles give or take any detours that we might find excuses for.

We’ll stop for lunch at a pub somewhere along the way. Possibly the Black Swan in Martyrs Green or the Cricketers in Downside unless someone has better a suggestion.

The route will be on road for a lot of the time although we’ll take you on one or two off-road paths that you probably didn’t know were there. Road tyres recommended if you have the choice.

September’s bike ride didn’t happen – sorry I was just too busy to organise it. And now that the days are shorter it’s no longer practical to do it mid-week, so we’re moving to a weekend slot instead.

October’s bike ride will be on Sunday 18th at 11:00am. We’ll start from outside the Hand and Spear at Weybridge Station as usual. The plan this month is to proceed down to Weybridge and then pick up National Cycle Route 4 and follow it through Chertsey to Staines. We’ll stop for lunch at a pub and then return along the towpath on the northern side of the river to Laleham and then Shepperton, finally crossing the river at the ferry and then back to Weybridge Station.

The route is mostly designated cycle lanes most of which are shared pavement, the towpath sections are well surfaced so road tyres will be ok.

After being contacted by members of the Elmbridge Cycle Group and the Weybridge Society Transport Panel, Weybridge Hospital has just installed eight Sheffield Stands which will accommodate up to 16 bicycles.

These replace the old “wheel bender” style rack which had a usable capacity of about three bikes.

Well done to Weybridge Hospital for responding to our requests and providing much improved facilities so quickly. 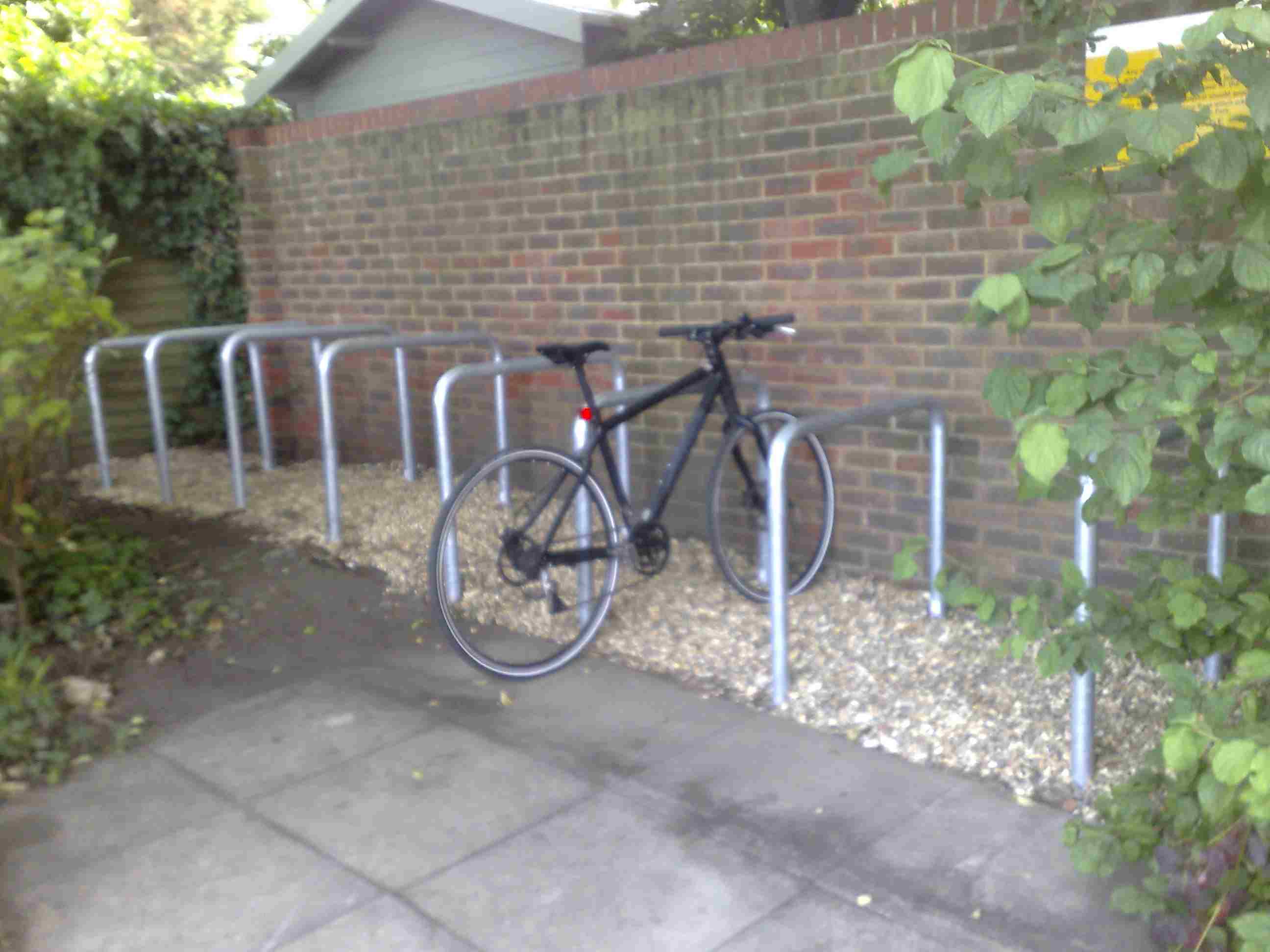 The August ride will be on Thursday 20th August at 6:30pm.

Everyone is invited, all you need is a bike. It’s free, there is no charge.

The pace will be gentle and fairly flat, suitable for everyone.

Children under the age of 13 must be accompanied by a responsible
adult.

Meet at 6:30pm in front the Hand and Spear Pub which is next to Weybridge Railway Station. Contact George James on 07930-320241 or george.james@elmbridgecycle.org if you have questions.