Elmbridge Local Committee meets on Monday 27th July and item 8 on their agenda is their report about cycling safety in Oatlands Drive.

A letter of representation was present to the committee in March expressing concerns about the safety of cyclists using Oatlands Drive. This meeting will present the council’s response and the action they propose to take.

You can read the report here.

If you are interested in attending the meeting to hear the report being presented in public then details and agenda are here.

The first Explore Elmbridge cycle ride was a great success, so we’ve decided to organise another for next Thursday 16th July.

As before we’ll start at 6:30pm from outside the Hand & Spear pub at Weybridge Railway Station. Ian McKechnie will be planning the route this time and I think we’ll be taking a circular route that starts off heading towards the east and then curves back round to the Thames. The whole excusion should take less than two hours and will finish back at the Hand & Spear.

The weather forecast for next week suggests it will be “an unsettled mix of sunshine and showers” so it’s anyone’s guess what we’ll get, but we might just be lucky.

You don’t need to let us know if you are coming, just turn up on the day.

The local public enquiry for Walton Bridge will be on Tuesday 30th June at the Holiday Inn, Shepperton.

The announcement about this and details of the new bridge proposals are here: http://www.surreycc.gov.uk/sccwebsite/sccwspages.nsf/LookupWebPagesByTITLE_RTF/Walton+Bridge?opendocument

According to the timetable, work could start as soon as next February, but won’t be finished until well after the London Olympics, so no respite for cyclists for at least another four years. As this is my main commute, that means I’ll be having to cross this terrible bridge at least another 1,500 times. Yuk.

Bike Week is the biggest nationwide cycling event in the UK. It runs from June 13th to June 21st. As part of this event Elmbridge Cycle Group is organising the first of possibly many Explore Elmbridge cycle rides. This will be on Thursday 18th June at 6:30pm and will be no longer than two hours.

This bike ride will start at Weybridge Railway Station and will take you on a circular route, mainly off-road, showing you some bits of the Weybridge area that you might not know about.

It will start at the car park outside the Hand and Spear pub at the station and last for a maximum of two hours. The terrain will be varied and rough in places. Some of the route will be alongside the Wey Navigation. You should be a capable cyclist.

The ride will finish back at the start point and some may wish to conclude with a small refreshment in the Hand and Spear.

This is a free event and everyone is welcome. Just turn up on the evening (don’t be late) or contact me georgej@georgejames.com to let us know that you are coming.

With the County Council elections coming up on June 4th I thought I’d speak to each of the nominees for my division (Weybridge) and find out their policies and plans for cycling in the area.

First up was the current incumbent Ian Lake (Conservative). He first talked about Surrey County Copuncil’s current achievements which comprised a bit of cycle lane along Portsmouth Road in Esher. On a positive note he indicated that the number of cyclists has consequently gone up from 50 or so to about 150 per day. He then talked about possible plans for the routes through Churchfields Recreation Ground and a shared path along Seven Hills Road.

When pressed he acknowledged that there was no budget for any improvements in the borough and admitted to not having a target should be be re-elected. He rated cycling as on a par with a number of other issues such as environmental policies.

He does not own a bicycle but does own a car although he says that he does walk a lot.

Next was Ian Davidson (UK Independence Party). He had no profound thoughts about cycling in the borough, but did feel that there was too much traffic and that we were reaching a crunch point. He felt that continual economic growth was unsustainable.

Ian does not own a bicycle although he used to cycle when he was younger, but his wife thinks it is now too dangerous to cycle on the roads. He owns a car and feels its is essential in the part of Weybridge where he lives as there is no alternative.

Vicki Mcleod (Liberal Democrats) feels that cycling is important and would like to see safe cyling routes established in the area. In particular she feels that guaranteed safe routes to secondary schools would be beneficial to children and alleviate traffic congestion by reducing the number of school runs at rush hour. She feels that a lot can be done to improve facilities for cyclists by establishing shared use footpaths in those areas where there is low pedestrian traffic. Vicki also feels that it is important to raise public awareness of pleasant cycling routes, such as those in the Surrey Hills.

When asked about budget, Vicki admitted that she had no idea but was aware that the current budget was non-existent.

Vicki is a regular and keen cyclist although she does use her car when on business. She also believes that cyclists should act responsibly by wearing hi-viz clothing and not jumping red lights etc.

As an Elmbridge Borough Councillor Peter Harman (Weybridge Independents) is already active in the promotion of cycling in Elmbridge. If elected he would promote both cycling and road safety in the area and demonstrated a good knowledge of the current hot issues (Seven Hills Road, Oatlands Drive etc). However, he has no idea about how much budget he would push for.

Peter does own a bicycle but does not use it frequently. He commutes by car to his regular workplace at Heathrow Airport.

Anna Thomas of the Rainbow Trust Children’s Charity wrote to me this week to let me know about their annual country bike ride. It starts in Cobham and happens on Sunday 19th July. There’s a choice of 10 mile, 23 mile and 49 mile routes.

For more details or online booking folow this link: http://www.rainbowtrust.org.uk/subpage.cfm?level1Id=3&level2Id=638&level3Id=0

The cycle parking facilities at Weybridge Health Centre are not adequate. Sandie Weaver, the facilities manager there, has said that it would help her case for getting better facilities if some patients wrote letters of complaint.

Below is the body of a letter that was recently sent to them by the Weybridge Society. If you agree that the provision for bicycles at Weybridge Health Centre is inadequate then why not also write them a letter.

We understand that the cycle parking facilities at Weybridge Hospital are outdated and inadequate for the number of people who regularly want to park their bikes at the Hospital. A single cycle rack with six slots is provided however due to the design of the rack only three slots are usable. There are often more than three bicycles parked at the Hospital.

There are about 100 people who work on the premises and probably over 100 patients and visitors on-site at any one time. In lieu of any guidelines from Surrey County Council, Transport for London have published guidelines1 which suggest that there should be one cycle parking space for every 5 hospital employees and one space for every 10 visitors.

According to these guidelines 30 cycle parking slots would be an appropriate provision.

We urge you to consider replacing the existing cycle rack, which is not fit for purpose, with 15 Sheffield Stands, each of which has the capacity for two bicycles giving 30 parking spaces.

In addition to the TfL guide mentioned above, Sustrans also provide a simple and clear cycle parking information sheet which you might find helpful in planning new parking facilities2.

As well as introducing an acceptable amount of parking this would also send a clear message that you are interested in promoting cycling as a healthy and environmentally sound form of transport.

The government has just released data about the location of cycle accidents for the years 2005, 2006 and 2007.

I’ve taken this data and viewed part of the Elmbridge area in Google Earth. Here’s what it looks like: 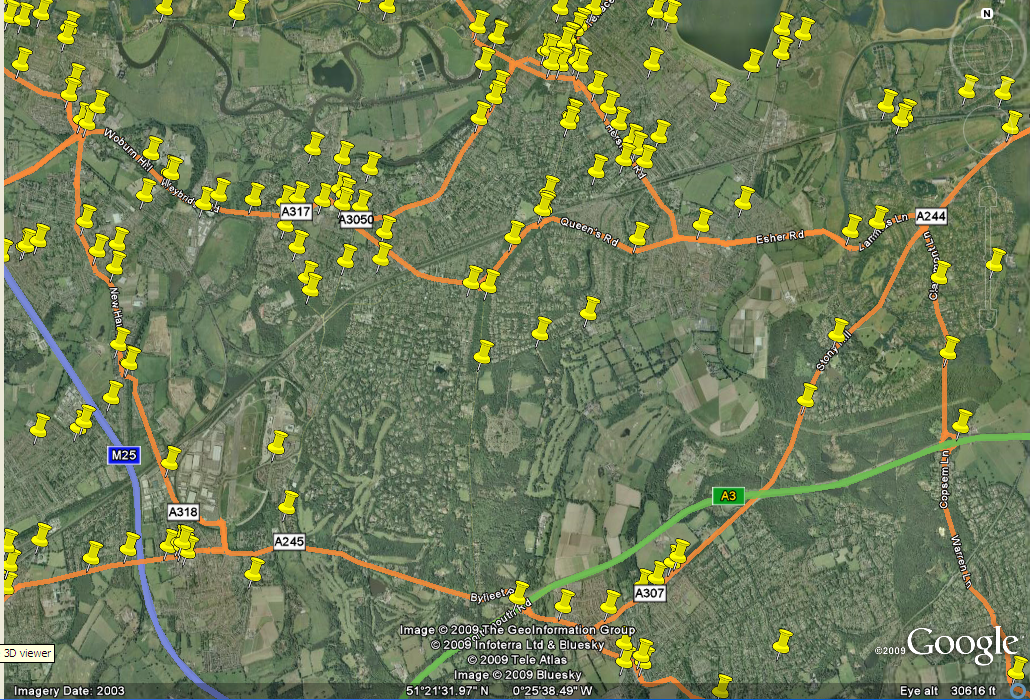 There are obvious clusters around Weybridge and Walton and along the main roads. There were three accidents on Waton Bridge compared to none on Chertsey bridge. Hersham Road from Walton to the Halfway is also prominent to my eye.

If you want to view this data yourself in Google Earth or want more information about where it came from then check these blogs:

According to the BBC news a cyclist was involved in a collision with a van on Seven Hills Road on November 19th.

Last week James Daley, a columnist in The Independent admits that he ran a red light on his bike. He was listening to an iPod as well at the time.

I expect the Metropolitan Police will want to have a word with him.

If you want to have a word with him his email address is: j.daley@independent.co.uk